View a short video About the Lower Glen Farm

Portsmouth’s Lower Glen Farm consists of a grouping of historic buildings, on 11 acres of property that represents a unique and relatively intact example of early 20th century barns, stables and outbuildings. These handsome buildings reflect an important era in Portsmouth’s recent past, where agriculture was the anchor of its base economy and the practice of maintaining a country estate by figures of the “Gilded Age” was in vogue. The property is adjacent to several other areas that are being maintained by the Town as open recreation space. These include 120 acres of public land that includes the Gardner Seveney Sports Complex (that also hosts the Newport International Polo Enterprise), the Glen Park recreation area and the Glen Manor House and its adjacent land that is planned for a public park overlooking the Sakonnet River. These areas include hiking and riding trails and also access to the Sakonnet Greenway that is being developed in conjunction with the Aquidneck Island Land Trust to provide a contiguous public access hiking and a riding area from south to north on Aquidneck Island. An adjacent property, the  Arthur Daniel Howell House (previously referred to as the Phelps House, but renamed, by Town Council resolution, in 2019 in recognition of the 65-year tenure of Howell as the Mason Phelps property superintendent) of the is also owned by the Town. The two story colonial home was built in 1915. The Town has entered into an agreement with a private concessionaire to renovate the property and operate it as a Bed & Breakfast.

The Lower Glen Farm Complex has four Large Barns, a Riding Arena, and a number of ancillary structures 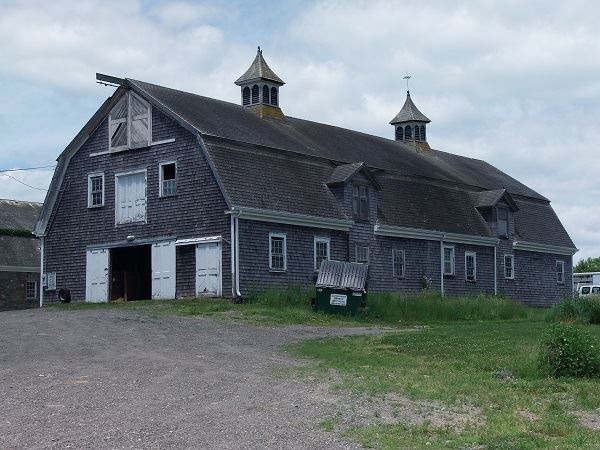 This building, also called the “Program Barn” is a 40 ft X 100 ft 2.5 story gambrel roof, wood framed building with a floor area of approximately 4000 sq. ft with loft space above. This barn has stalls for 14 horses. It was built circa pre-1902. Aligned on a north-south axis, this wood shingled barn has a heavy cornice molding and sits on a rubblestone foundation. At its south gable end, there is a hay door over a wide barn door, flanked by two dormers, which incorporate hay doors. The roof is capped by two cupola ventilators, similar in design to those found on other barns in the complex. 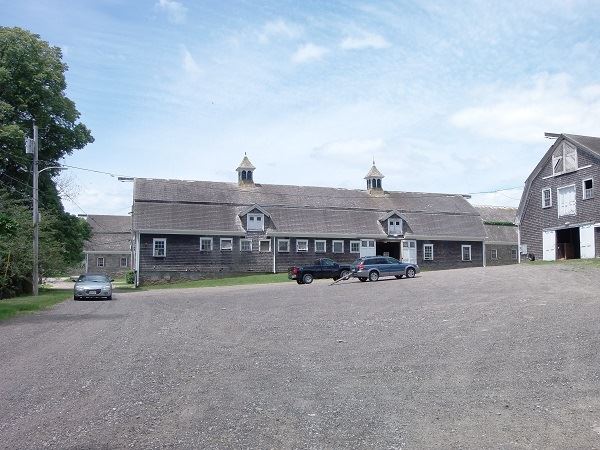 Built in 1902, this is a 34 X 116 ft. two story wood-frame structure that has a floor area of 3,944 sq. ft. with aloft area above and a partial basement. Its stable area has 18 horse stalls. Similar in form to Building #4, this barn is 13 bays long and has barn doors at either end. At its southern end, the building sits on a high rubblestone foundation because of the sloping grade. It has the same gambrel roof configuration with ventilation cupolas and two gabled dormers on each side of the roof. 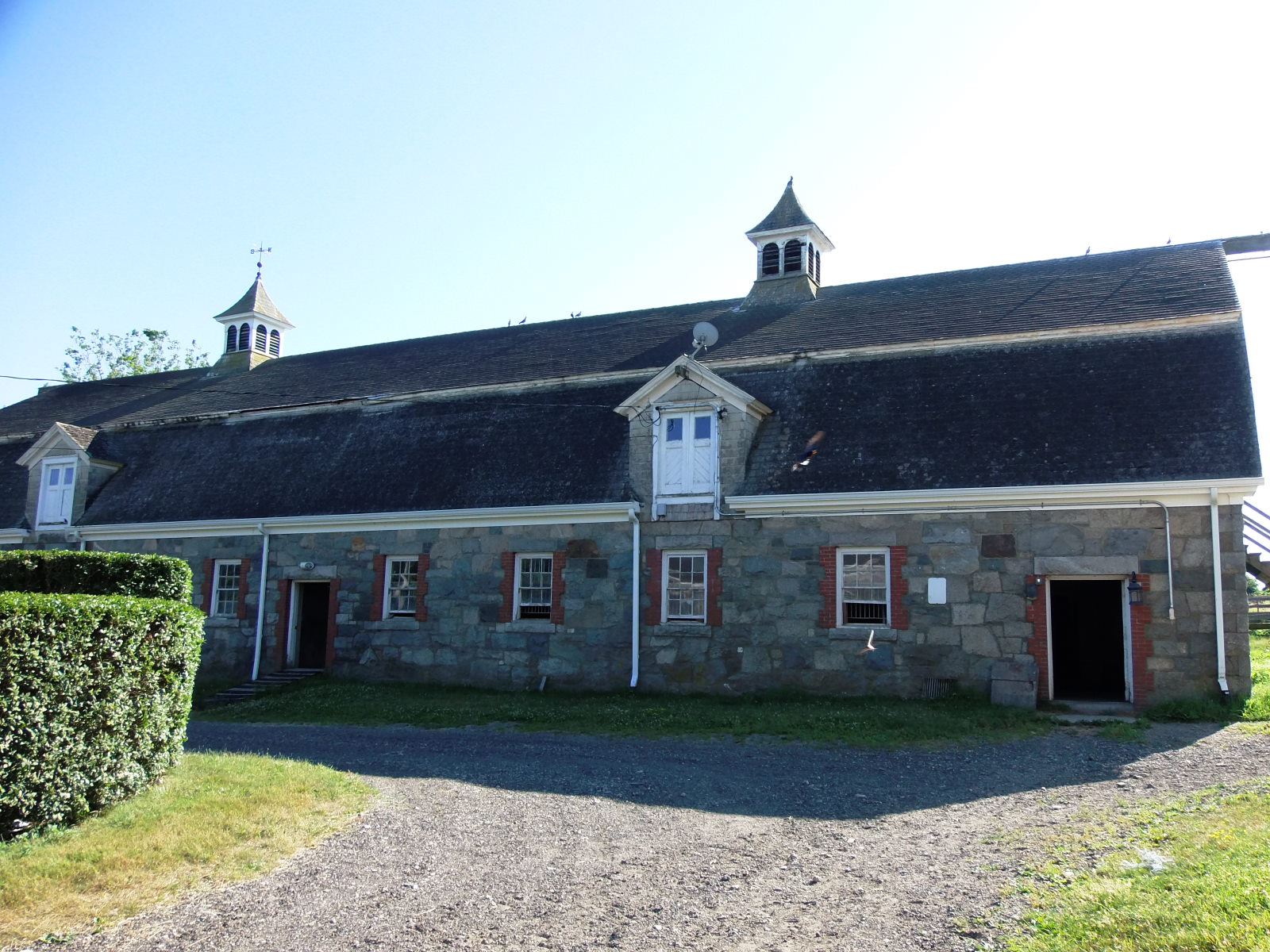 This is a 2.5 story building that measures 42 ft. X 124 ft. It has a floor area of 5,208 sq. ft. and accommodates 18 horse stalls. Built in 1911 and one of the three stone barns on the property, its building form is similar in character to the other two barns. Construction is a combination of rough-cut irregularly coursed ashar and rubblestone. It has a gambrel roof with ATM-2 Type shingles. The roof, with its heavy cornice molding, ventilator cupolas and gable wall dormers with hay doors is similar to the other barns in the complex. The first and second floors have doors flanked by windows. Doors and windows have granite sills and lintels and are trimmed with crenellated brick surround. The south gable end has a hay door at the roof peak, while the north end has a chimney and a dormer. On the building’s west façade, there is a door that leads directly from the horse stalls directly into the attached paddock. At the north end of the building, there is a second floor apartment with access gained by a set of exterior wooden stairs. An oil-fired boiler, to heat the apartment, is located on the ground floor and adjacent to the tack room. 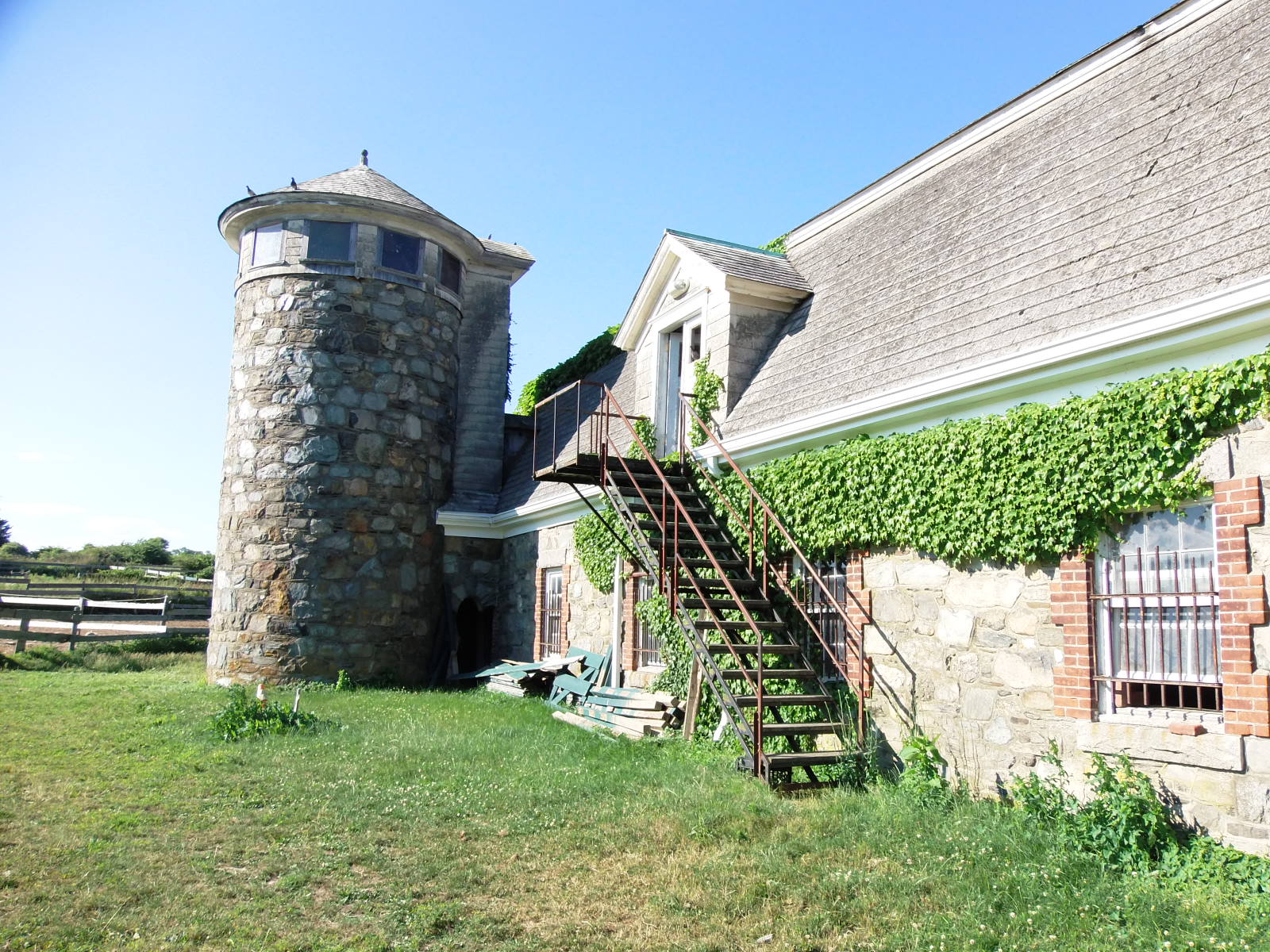 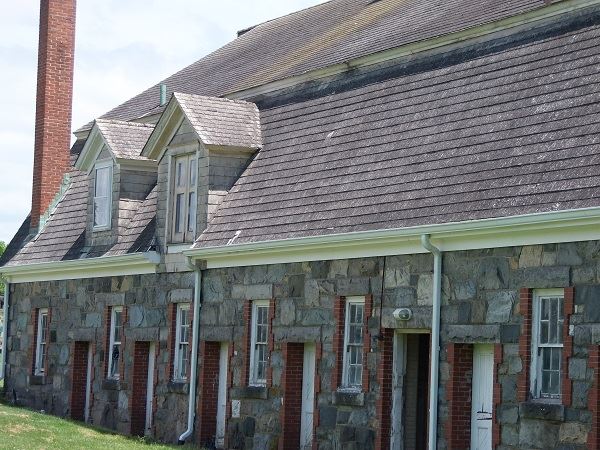 Built in 1907, the Dairy Barn is a 2.5 story stone building. Its 5,124 sq, ft. first floor contains an office and storage area, a Tack Room and stalls for 18 horses. The first floor measures 42 X 122 ft. and there is a two-bedroom apartment located on the second floor at the south ends of the building. The remainder of the loft area is used for storage. There is a partial basement with a coffered ceiling of concrete supported steel beams. At the north end of the building, there is a stone silo connected to the barn with a stone passageway. The silo is capped by a band of windows located under the eaves of its conical roof. In addition, there is a wooden feed silo just south of the stone one. Galvanized metal ventilators are used to ventilate the stables below. Masonry walls form the ground floor with brick lining the interiors and rough-cut rubblestone facing the exterior. Windows and door openings are trimmed with brick along with granite lintels and sills. 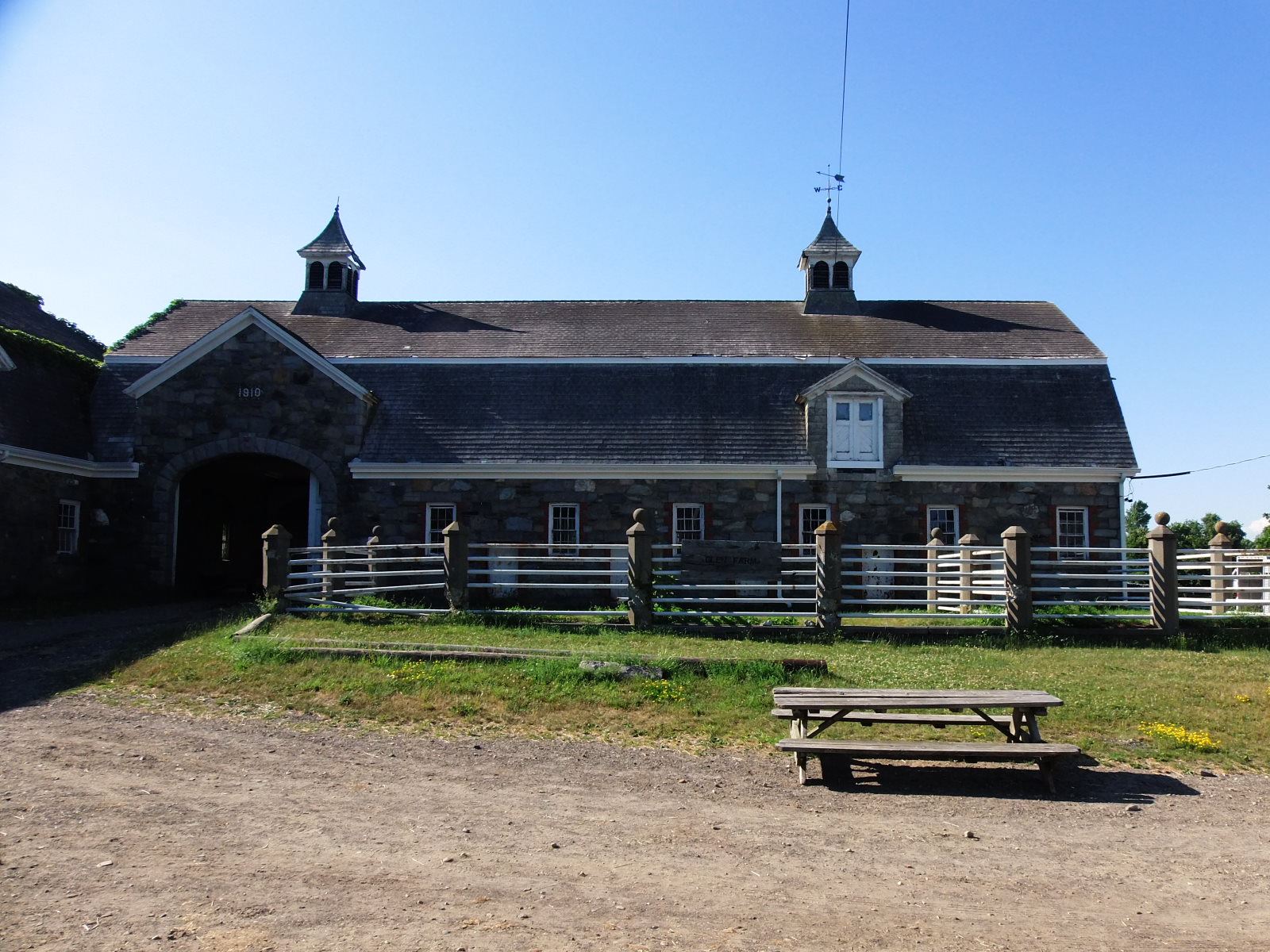 Also known as the Bull Barn, it is attached at right angles to Building #8 by a porte cochere. Built is 1910, it a similar style to the other stone barns. A 2.5 story 38 X 92 ft. building, it has a first floor area of 3,496 sq. ft. There are ten horse stalls in the barn. On the exterior, a series of fenced bull paddocks with concrete posts and steel rails are located along the barn’s southern face. The barn has a gambrel roof with a pair of cupola ventilators. Entrance to the barn is gained from under the porte cochere on the west side of the building or from the north or south facades, which are defined by gabled walls dormers over segmented arched doorways. At the east end, a hay door is located in the roof peak. On the first and second floors, there is a doorway flanked by windows. On the south façade, a series of doors open directly to the bull pen area. 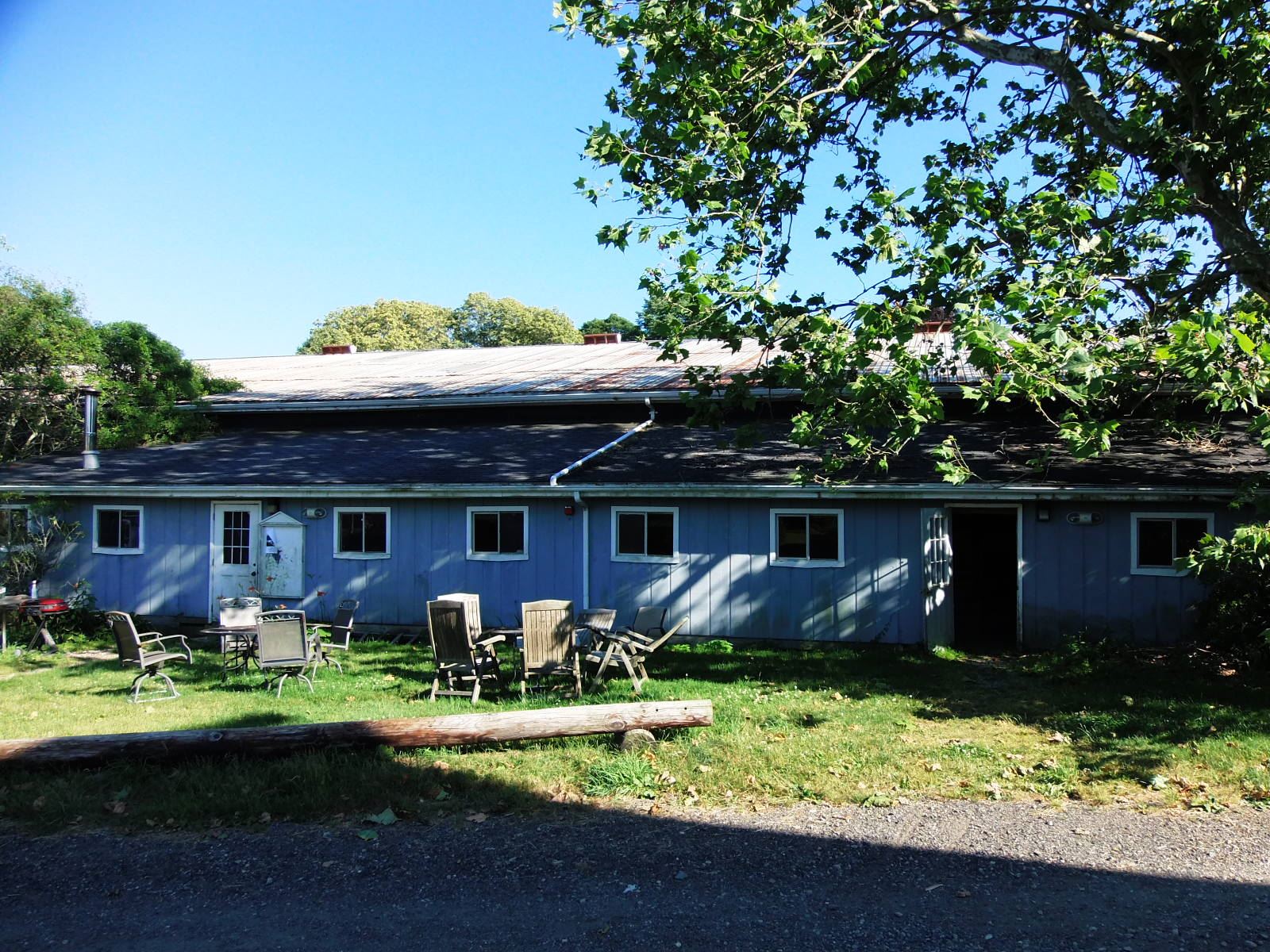 This is a single-story, wood-frame building of approximately 17,280 sq. ft.. The building is completely open for riding horses, except for a 1,280 sq. ft. viewing area. The interior finish is wood. 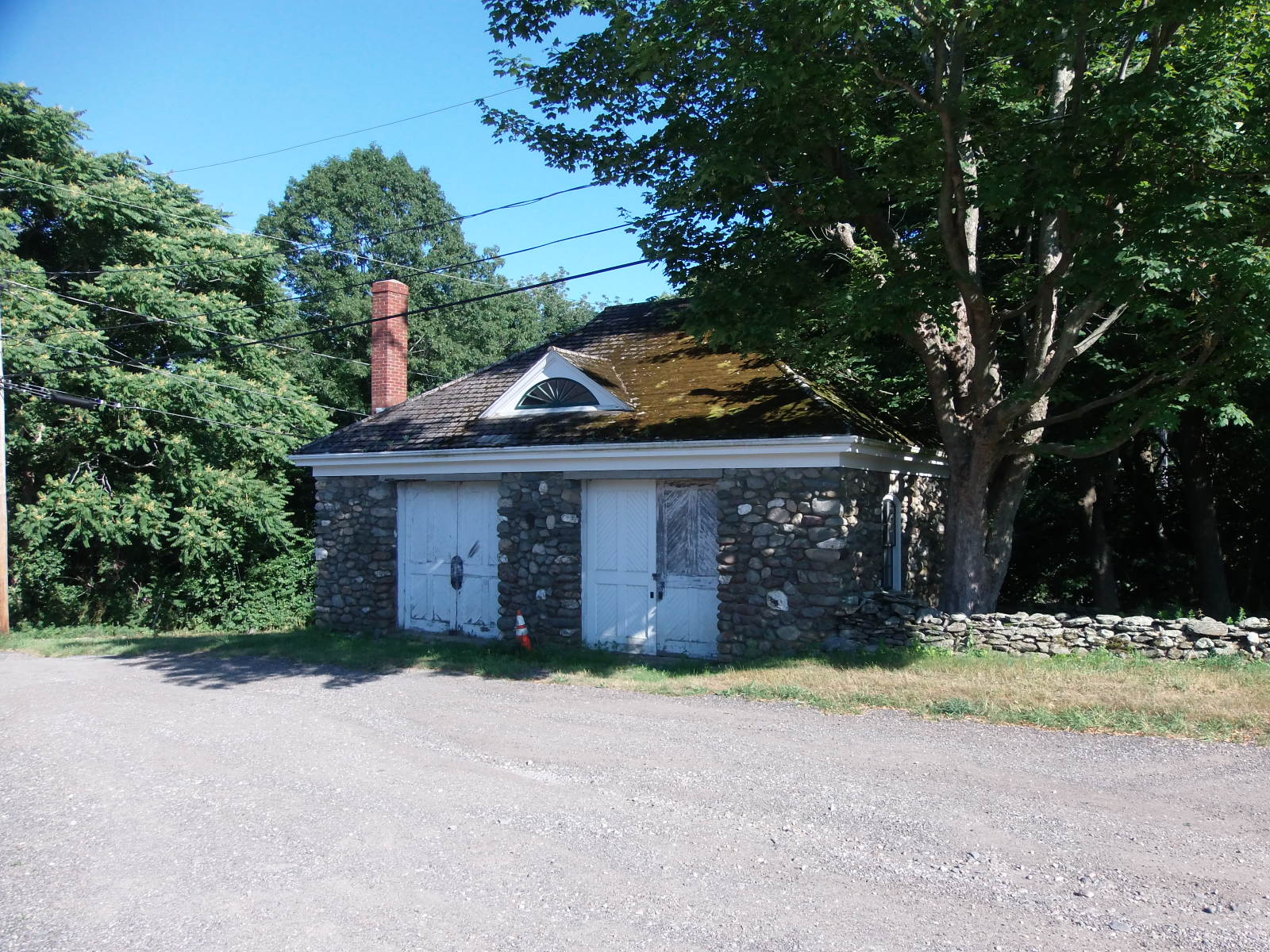 Similar in design to the Pump House (Building #11 below), this building is a one-story, two-bay cobblestone garage with a gable on him roof and a triangular eyebrow clerestory. The windows have segmented arches. The building measures 28 X 33 ft. with a total area of 924 sq. ft and was built in various stages circa 1907 to 1926.

The Tool House and Wagons Sheds (razed in 2017)


The Tool  House and Wagon Sheds were demolished in 2017 due to major structural problems and safety concerns.  Unfortunately it was not economically feasible to rehabilitate the buildings.

The structure had turn of the 20th century, hand-hewn beams and the deconstruction company salvages what they could to reduce the cost of demolition. 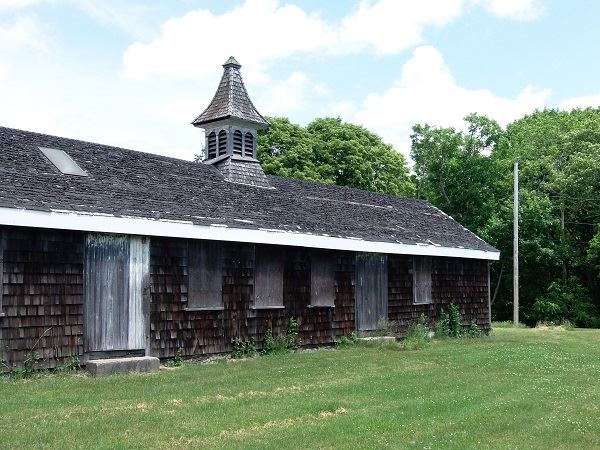 Built circa 1895-1907, the structure collapsed in 2017 and was removed. This one-story structure was the smaller of two wood-framed out-buildings that formed the eastern boundary of the complex and abut Glen Farm Road. It measured 18 X 52 ft. for a total area of 936 sq. ft.. It was located perpendicular to Building #3B that parallels Glen Farm Road. 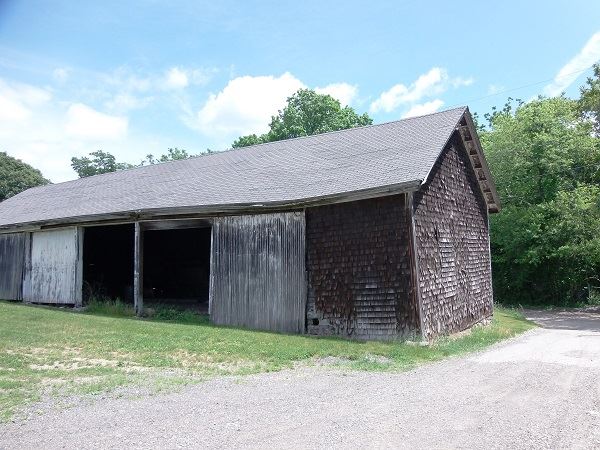 Built circa 1897-1907, was razed in 2017 due to major structural problems. This building measured 25 X 138 ft. for a total area of 3,459 sq. ft. the one-story wood-framed shingled building that sat on a rubblestone foundations. It had a gable-style roof. It had eight sliding barn doors on its west side. 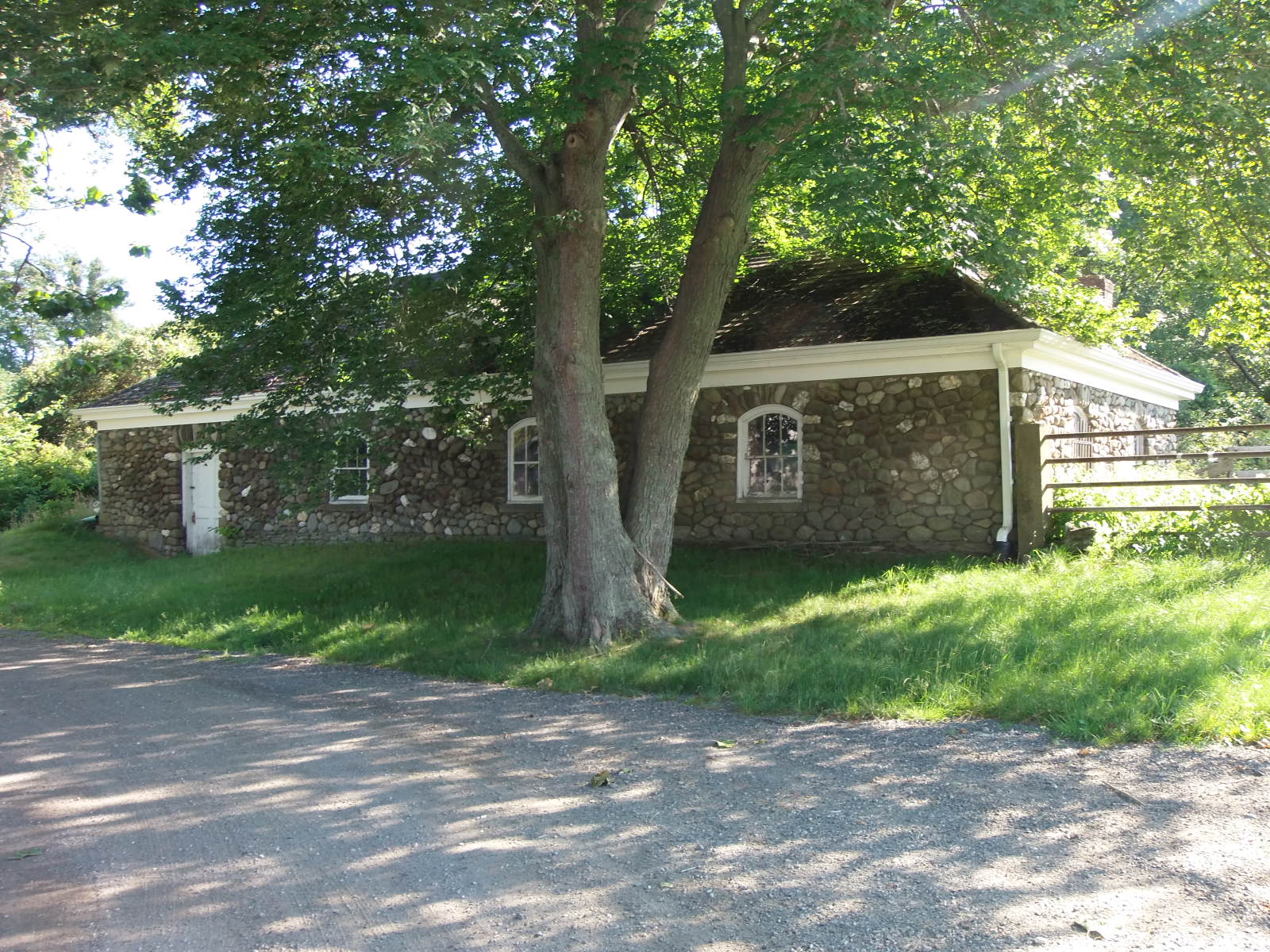 Built and modified in various stages circa 1907-1926, it is a one-story masonry structure that serves as the pump house for the complex. The building originally housed the machinery required to pump the water from the adjacent cistern to supply the farm’s water system. It measures 26 X 64 ft. with an area of 1,664 sq. ft.


This 915 sq-ft building is located to the south of the cemetery.. Built circa 1900, it is thought to to have been used for ice storage.

In a report by Nancy S. Seasholes for the Public Archaeology Lab in 1995 she did a detailed analysis of all the buildings at Glen Farm. In regard to the Ice House she wrote the following:

"Immediately south of the cemetery is a one-story one-by-three bay front gabled gambrel-roofed building with a wide cornice molding, wood shingle siding, and a rubblestone foundation. There are two cupola vents that have finials, pyramidal roofs with flared eaves, and roundhead louvered vents: at the south end is a hay lift, presumably for raising blocks of ice.

The icehouse, with its gambrel roof, cupola vents and wood shingles, is similar in style to the frame barns, which were built ca. 1900. The icehouse does not appear on the 1907 map, however, and instead the mill is labeled “icehouse,” which suggests that the icehouse may have been built after that date. The building reportedly has walls two-feet thick and was used to store ice cut on St. Mary’s Pond( Raymond Janssen, personal communication). In the 1980s it was remodeled and was used as a residence by the farms caretaker.” 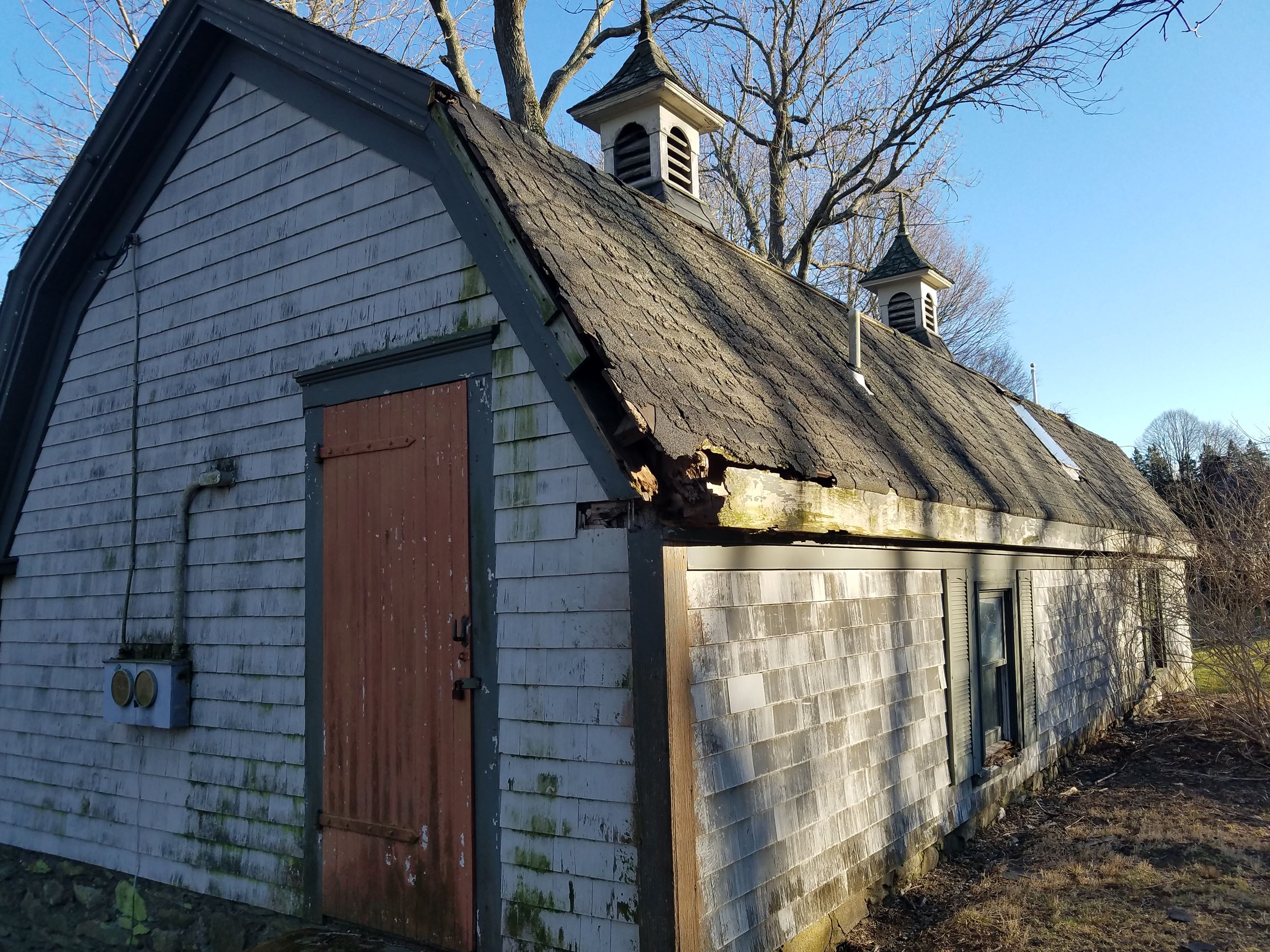